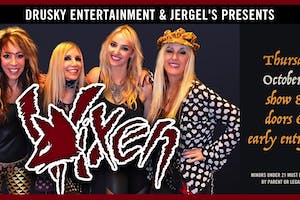 Alex Henderson, writing for Allmusic, says they started in 1981 in Los Angeles.[2] In 1984, an early version of the band with Kuehnemund, singer Janet Gardner and bassist Pia Maiocco (who later married guitarist Steve Vai) appeared in the movie Hardbodies, as the on-screen band Diaper Rash. In 1985, the band moved to Los Angeles, California to be part of the L.A. rock scene.

Lineup changes happened during the following years until the "classic lineup" of Janet Gardner (b. Janet Patricia Gardner on March 17, 1962 in Juneau, Alaska, USA) - lead vocals, rhythm guitar, Jan Kuehnemund (b. Janice Lynn "Jan" Kuehnemund, November 18, 1953 – October 10, 2013) - lead guitar, background vocals, Share Pedersen (b. Sharon June Howe on March 21, 1963 in Glencoe, Minnesota) - bass, background vocals, and Roxy Petrucci (b. Roxy Dora Petrucci on March 17, 1960 in Rochester, Michigan) - drums, background vocals, was formed. This lineup of Vixen was interviewed in 1987 along with many other rock artists of the day by Penelope Spheeris for her film The Decline of Western Civilization II: The Metal Years.

In 1988 the band was signed to EMI, and they began recording their debut album Vixen, which was released in September 1988. Singer-songwriter Richard Marx co-wrote with Fee Waybill and arranged their signature hit, "Edge of a Broken Heart" and produced the song. Rumor was he was asked to assist the all-female band by EMI to produce their first major hit. Richard Marx had nothing to do with their follow-up CD, since he was becoming more of a mainline singer than songwriter. Vixen spent the next year touring the world, supporting acts such as Ozzy Osbourne, Scorpions, and Bon Jovi, as well as headlining their own shows. The band returned to the studio in late 1989/early 1990 to record their follow-up album, Rev It Up, which was released in July 1990. A year of touring followed, including headlining their own shows and supporting acts such as KISS and Deep Purple. In mid-1991, the group disbanded due to musical differences.