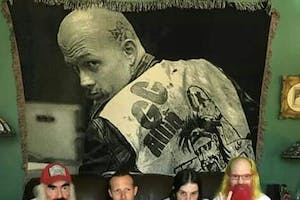 Support acts are subject to change without notice

The Murder Junkies were the last backing band of notorious punk rock performer GG Allin. After Allin's death, his brother and bassist Merle Allin, guitarist William Weber, and drummer Dino Sex decided to continue the band without GG. They recruited a new singer Mike Denied, and have released the album Feed My Sleaze. The band tours sporadically and has gone through several line up changes.

The most contemporary singer has been J.B. Beverley, a musician from the Washington DC area who fronts two other bands, The Little White Pills and The Wayward Drifters. Jeff Clayton of Anti-seen has also toured with the Murder Junkies during some of the 1990's and during the 10th and 11th anniversary of GG's death.