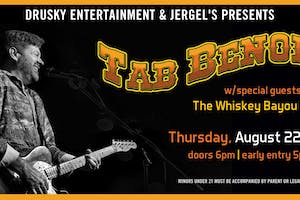 "MEDICINE" the long awaited studio recording by Tab Benoit will be released on Telarc International / Concord Music Group in April 2011.

The 11 song "MEDICINE" was co- produced by Tab Benoit / Anders Osborne and engineered by David Z at Dockside Studio in Maurice, LA. The recording features Tab on guitar and vocals along with Anders Osborne on guitar , Ivan Neville on Hammond B3, Drummer Brady Blade, Corey Duplechin on Bass, and Michael Doucet on Fiddle. Six of the most relevant root's musicians of today have joined together to bring to you the deepest grooves and most meaningful roots music that some say top Tab Benoit's catalog.

Medicine is your best musical purchase of 2011/2012 So Be sure to get your dose of Medicine just in time for SUMMER.