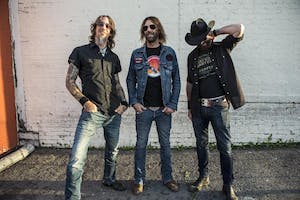 Support by The Hangmen, The Cheats and Stone Wicked Souls

Supersuckers will be celebrating the 20th Anniversary of the album “The Evil Powers of Rock ’n’ Roll”, playing it in its entirety!

You've heard our name, you've seen our records, our t-shirts and our stickers. We're probably the favorite band of someone you know and yet we're still a mystery to you. Well my friend, that's okay, I'm here to fill you in and help you to get to know the greatest rock-n-roll band in the world, The Supersuckers.

Our story is almost impossible to believe. This band is literally a human cartoon. We all grew up among the dead-ends and cactus needles of Tucson, Arizona and have known each other since grade school. We graduated from the same high school together at the same time (a school immortalized in our song "Santa Rita High") and we chose to play in a band together because we liked to hang out together, not because we were great musicians or anything. I truly believe that a band is defined by their limitations, that what they can't (or won't) do is just as important as what they can do. I guess that, in this era of pre-fabricated, put-together-to-have-a-hit bands, we're kind of an aberration and I gotta tell ya that that makes us smile a little every day.

We formed the band in 1988 and we were initially a five piece called The Black Supersuckers (a name found in some quality "adult literature" we had laying around in our impeccably clean band house), with me on bass, Dan "Thunder" Bolton and Rontrose Heathman on guitars, Dancing Eagle on drums and a lead singer by the name of Eric Martin. After firmly proving ourselves to be the best band in town we decided it was time to get out of Tucson and try our luck somewhere else. So we tossed a coin with heads as New Orleans and tails as Seattle. Tails it was and in May of ‘89 we packed up and went north.

We had no idea that Seattle was about to become "Rock Mecca USA" we just wanted to go somewhere where we could wear our leather jackets a little more often. It was exciting and encouraging to see all of the great bands there, doing their own thing and making some kick-ass, aggressive rock-n-roll that we could relate to, so we started recording immediately. After some classic "creative differences" with our lead singer, we decided to try it as a four piece with yours truly as the singer (I was the only one who knew all the words) and The Supersuckers, as you may or may not know them today, were born.

Our first recordings as a four-piece wound up on various singles for small labels and then were compiled for a C.D. called The Songs All Sound The Same. (For the full story on these recordings I highly recommend picking up the re-issued version on our own label, Mid-Fi Recordings). But it was our live shows that caught the eyes of the good people at Sub-Pop Records and, after a particularly scorching show one night, they offered to put out our records. We said, "Buy us some beer and you got a deal!" And our long and enduring rock-n-roll ride was officially under way.

Starting with 1992,s "The Smoke Of Hell", we released a total of three rock records for Sub-Pop as well as a country record (Must've Been High), split singles with Steve Earle and The Rev. Horton Heat, countless singles and a "best-of" double album. Then we ventured out into the muddy and troubled waters of the major labels where we were signed and dropped by Interscope Records before finally (crash) landing at Koch who (barely) put out another Supersuckers masterpiece, "The Evil Powers Of Rock-n-Roll" in late 1999. We've always toured our asses off all over the world and that has never stopped. We hit the road with bands like Mudhoney, Social Distortion, Bad Religion, The Ramones, Motorhead, The Toadies, The Butthole Surfers, The Reverend Horton Heat, The Dwarves, White Zombie and Pearl Jam. We've played a few Farm Aid shows and backed Willie Nelson on The Tonight Show. Our music has appeared in T.V. shows (Beverly Hills 90210, Viva La Bam, Simple Life, Road Rules Challenge, Real World, all that crap), Movies (Baseketball, Hype) and commercials (Mountain Dew) as well as countless snow and skateboarding video compilations.

Throughout this entire time, our sole mission has been to create and perform timeless, quality music and get as many people as possible to hear it. That goal has never changed. The pursuit of that perfectly imperfect rock-n-roll moment is all we've ever been after. We've been doing this for well over a decade now and we're just getting started.

2001 found us starting our own label; Mid-Fi Recordings. We've finally decided to take control of all of our affairs and have become a lean, mean, self managed, totally independent rock-n-roll machine. We've got the greatest fans in the world and no one cares more about them and our music than we do. Having our own label gives us the freedom to make more of our music available to them without the hassles of "the middle-man" worrying about things like "marketing" or "demographics". Hell, these are just hard words. All we want to do is get some kick-ass music out to the people and with Mid-Fi we have been able to do just that. Our first release was a live country record entitled "Must've Been Live", that came out in March, 2002. Since then, we have dug into our "private reserves" and released several singles of some our finest outtake stock (a habit we intend to keep), and we've also managed to pull off a couple of "split" singles with fellow under-appreciated rockers, the Hangmen, Throwrag and Zeke.

In 2003 we unleashed the impeccably titled, Motherfuckers Be Trippin', (April 22nd, 2003) on the world. It was the perfect follow up to The Evil Powers Of Rock N Roll, it spent a couple weeks on the Billboard Independent Charts and songs from it have been featured on MTV's Real World and Viva La Bam shows as well as countless ski and snowboard videos. We even managed to work a single (Rock N Records Ain't Selling this Year) to radio where it was #1 on the RnR Specialty Charts for 4 weeks in a row (whatever that is). We have since been able to keep the releases coming at a rate that could never be achieved with any other label. In addition to MFBT, we've released my first solo album, The Sauce, as well as a second version titled Extra Sauce which features the incredible Mickey Raphael from Willie Nelson's band playing harmonica all over it and my second solo record, Old No. 2 in October of 2005. We've also established the Mid-Fi Field Recordings series which has seen the release of three live Supersuckers records and one live DVD and will hopefully be the vehicle for our first release by an artist other than the Supersuckers. (Perpetually on the menu is Mid-Fi Field Recordings, Vol.? which will feature one of the last performances by the criminally under-appreciated Zen Guerrilla on New Years Eve 2002. I dare say this is perhaps the greatest live recording of all time! In the works is a remix version of Old No. 2, which will blow some minds for sure!

All this leads us to the new Supersuckers E.P., "Paid" which is by far the best thing we've ever recorded. We're releasing it as an E.P. so that we can keep the music coming in steady bursts. We're tired of seeing these artists release full length albums with two good songs on ‘em and we want to be the trendsetters (once again) and show everyone a new way to get the good stuff to the peoples! We'll be cranking out a few of these E.P.s and, if we have to, then we'll slap together a full length from ‘em with a few new ones thrown in as well. That's the way they did it in the Fifties and Sixties and I think that, with the way people are buying their music these days, it's the way to go again. We'll see.

Another nice tidbit is the recent addition on Scott Churilla as the newest member of the Supersuckers family. You may or may not be aware that, since the 2004 departure of our original drummer, we've had a rotating cast of characters behind the drums for us. It was all very "Spinal Tap" and fun for a while but we're so happy to have it all behind us and be able to call ourselves a first class, four-piece rock and roll band once again. You may know Scott from his 10+ years as the drummer for The Reverend Horton Heat. He's absolutely incredible and we are way better than ever with him back there.

WHEW! That's a lot to take in and it barely scratches the surface of all that we've done and plan to do. So, the next time you see The Supersuckers name, whether it's in the record store or on the marquee at your local nightclub, know that there's some quality, honest, ass-kicking, hard working individuals in there, trying to make your life a little better through the "Evil Powers Of Rock-n-Roll" (and the occasional detour into the country of course) and we'd love nothing better than to have you there with us. Just remember to wear you clean underwear, because we're gonna rock your pants right off of you.

* Toured extensively throughout the world including Russia, Japan, Australia, etc…

Testimonials on the Supersuckers:

"They played my birthday party. They rock!" -Eddie Vedder from Pearl Jam

"Every time I hear the word ‘Supersucker,' I'm reminded of an older gentleman who went into the strip bar and the hooker c'm dancing up to him and said ‘Superpussy!' and he said ‘Soup, please.'" -Willie Nelson

"The Supersuckers understand that great rock and great country are, at least on a spiritual level, exactly the same thing. Rock on, boys." -Steve Earle

"The Supersuckers rock ferociously whenever they feel like it and what really matters is ending this sentence with an exclamation point!" -Little Steven Van Zandt, E Street Band, Little Steven's Underground Garage