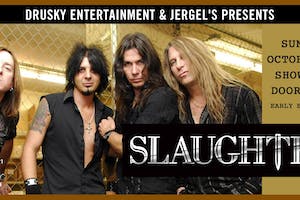 Former Vinnie Vincent Invasion members Mark Slaughter and bassist Dana Strum formed Slaughter with guitarist Tim Kelly and drummer Blas Elias in 1988 in an attempt to cross over to pop audiences. Their metal style's main focus is on catchy melodies and Mark Slaughter's impressive vocal range, particularly his somewhat nasal falsetto. Their first two studio albums sold quite well until their style fell out of favor with the alternative explosion. The group struggled throughout the 1990s, and on February 5, 1998, Kelly died in an auto accident; his final recordings appeared a year later on Eternal Live. Still, the band managed to regroup without him, releasing Back to Reality in 1999 with new guitarist Jeff Blando.