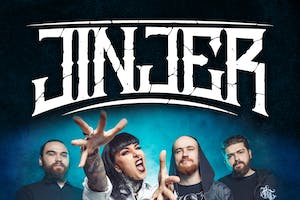 JINJER is a Ukrainian band which plays a mixture of progressive metalcore and groove metal, with some inlays of funk, reggae and jazz, though on their second LP the band is shifting a bit to death metal of the European school

In what could be described as nothing short of 'adventurous,' THE BROWNING's music takes influences from all across the metal spectrum and heavily fuses them with hardstyle, trance and other areas of electronic music in a way that most metal acts would not dare attempt. The band pushes boundaries and pushes buttons. In short, when it comes to The Browning, TheNewReview.net put it best when they said "the soundtrack to the apocalypse has arrived."

Punk rock metal band based in Hamilton, Ontario. Formed in 2011