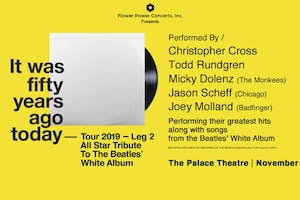 It Was Fifty Years Ago Today: A Tribute to the Beatles' 'White Album'

iCal
Google
A Tribute to The Beatles' White Album featuring an all-star line up!

Tickets go on sale this Friday, Septembr 27th at 10AM via ThePalaceTheatre.org!

This fall, an unlikely pairing of artists will embark on the “It Was 50 Years Ago Today” tour celebrating the (kind of) 50th anniversary of The Beatles’ White Album. While math may not be their strong suit (the iconic record was actually released 51 years ago), the high-profile lineup features The Monkees’ Micky Dolenz, Christopher Cross, and Todd Rundgren, as well as Chicago’s Jason Scheff and Badfinger’s Joey Molland. In addition to cuts from off the 1968 release, the collective will mix in hits from their own respective catalogs each night.

While the tour is “not affiliated or endorsed by the Beatles individually or collectively,” many of the band’s respective members each have connections to the Fab Four. Badfinger, in particular, has a long-running relationship with the Beatles as the first artist signed to their Apple record label in 1968. The Monkees similarly crossed paths with the Beatles during the early days of the group, with Dolenz joining the group in the studio for Sgt. Pepper Lonely Hearts Club Band. Finally, Rundgren has served as the guitarist for Ringo Starr’s All Starr Band for three decades.

The “It Was 50 Years Ago” Today tour kicks off in late September. Spanning until mid-October, the trek will bring the five-piece throughout the Northeast, Midwest, and Mid-Atlantic.