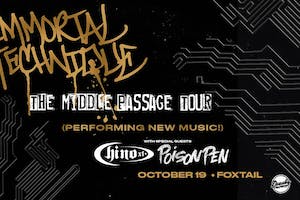 Immortal Technique is an American rapper and urban activist, born in a military hospital in Lima, Peru on February 19, 1978.

Chino XL is a US Lyricist of Black/Puerto Rican origin. He was raised in New Jersey (although he was born in the Bronx, NY) and has been rapping since the late 80's. He released his first single with the group Art Of Origin in 1992 and by 1994, had inked a deal with Rick Rubins label Def American to release his debut album in 1996, "Here To Save You All". He has since gone on to release 3 more albums, 2001's "I Told You So", 2006's "Poison Pen" and 2008's "Something Sacred".

After moving to the West Coast, Chino sought out a career in Hollywood. He is considered one of the more respected rapper/actors of his generation and landed a small part in the hit series CSI: Miami. In the rap game, he has worked with many different artists over the years, such as Kool G. Rap, RZA, Sway & Tech, J-Dilla, Ras Kass, Kool Keith, Common, Kutmaster Kurt, Killah Priest, Beatnuts, Royce Da 5'9", Jinusean, Saafir, B-Real and Snoop Dogg, plus many more.

He is the only known rapper that is a member of Mensa.

Born and raised in Brooklyn, NA Rock's (Nostrand Ave) own Mayor, Poison Pen has not only been a talented rap artist, he has been a mainstay in the battle rap circuit as CEO of Grindtime East Coast, Poison Pen TV and has worked with URLTV & KOTD. Pen has hosted plenty of legendary battles in NYC (Braggin' Writes). He's is from the legendary lyrical squadron, Stronghold, and is also one of leading founders of Team Homi.