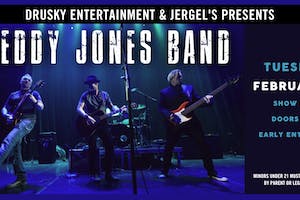 iCal
Google
February 4th, 2020 | Minors Under 21 with Parent or Guardian

About Freddy Jones Band: Modern rock radio hits rarely offer a band any street cred for its live show, but don’t tell that to Chicago’s Freddy Jones Band who have the hits (including the #1s “In A Daydream” and “One World”) but earned a truly decided fanbase from its anthemic concerts, which feature a blend of technical wizardry with air-tight, melodic, roots/rock songwriting. There’s no surprise that FJB has been packaged live with everyone from Dave Matthews Band to Bruce Hornsby to Hootie & The Blowfish and that their consistent songwriting resume has earned an organic, career-retrospective “This is: Freddy Jones Band” playlist on Spotify. Led by original singer and songwriter Marty Lloyd and former Samples bass player Rich Ross, Freddy Jones Band continue to be mainstays at hard ticket venues and events, from Boston to Chicago to San Francisco and everywhere in between with more recorded music to come in 2020.

With great songs and musicianship, the only thing the band can’t say they’ve ever had is a member named Freddy Jones. But, no one has complained.