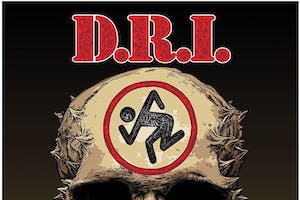 The DIRTY ROTTEN IMBECILES' history begins on May 2, 1982 around 4:00pm, in the city of Houston, TX. It was on this day that the musically aggressive quartet we now know as D.R.I. made their first Dirty Rotten noise and called it a song. Back then it was Spike Cassidy (guitar), Kurt Brecht (vocals), Eric Brecht (drums), and Dennis Johnson (bass).

The group started practicing at Kurt and Eric's parents home, where the brothers lived amongst the "Madman" (their father). They practiced a few nights a week around 5:00pm, just as the "Madman" would be on his way home from a hard day at work. He would open his front door only to be blasted with 120db of the band's horrendous attempt to make music. The "Madman" would then pound on their jam room door until he was let in so that in turn, he could throw them out of his house calling them such things as "... you bunch of dirty rotten imbeciles". This is how D.R.I. got their name.

On November 6th & 7th of 1982 D.R.I. recorded their first release, the Dirty Rotten EP, stuffing 22 songs into 18 minutes on a 7" EP that played at 33 rpm's. Only 1000 copies of this EP version were pressed, making it now a very rare collector's item. Demand caused this EP to be pressed into a 12" LP version, released in 1983, appropriately called Dirty Rotten LP. Leaving the underground music scene thriving for more, Dirty Rotten LP became a major success and also an inspiration for many new bands at the time. Soon after, D.R.I. was labeled the fastest band in the world.