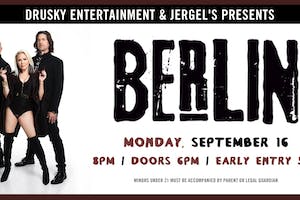 Mainly known for the 1986 Giorgio Moroder produced hit Take My Breath Away (from the movie Top Gun), as well as earlier songs such as The Metro, Sex & No More Words.

Split up in 1987. John Crawford went on to form the alternative rock act "The Big F". Terri Nunn resurrected Berlin in 1999 with a new band lineup, and she has been performing live & recording studio material since then.