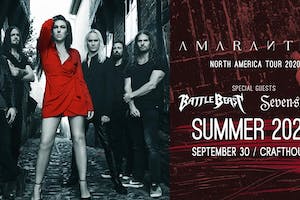 iCal
Google
September 30th. 2020 | Minors Under 21 with Parent or Guardian

About Amaranthe Amaranthe is a Swedish/Danish power/melodic death metal band that originates from Sweden and Denmark. Formed by Jake E. and Olof Morck, the project began taking shape when singers Elize Ryd and Andy Solvestrom signed on, as did drummer Morten Lowe.

In April 2011 their debut album "Amaranthe" was released to a worldwide acclaim, charting high in Sweden and Finland. It was the 84th most played album on Spotify in the whole world, all genres! In spring 2011 they did a full European tour with Kamelot and Evergrey.