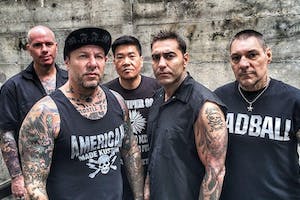 iCal
Google
Playing “Victim in Pain” in its entirety for the 35th Anniversary!

At the dawn of the '80s, New York City was mired in debt and crime, grappling with one of the most trying periods in its history, yet ironically (or perhaps fittingly), its underground music scene was seething with activity like never before. Still reeling from the violent inception and subsequent implosion of punk rock, hundreds of underprivileged kids living in Manhattan and its outlying boroughs began forming rock groups to rail against the everyday trials, dangers, and prejudices of urban existence. As had been happening in other urban centers (most notably L.A. and Washington, D.C.) equally affected by the lean, recession-laced early years of Reaganomics, New York became a melting pot/hub for a flourishing hardcore scene -- a cultural phenomenon that used punk rock as a platform for politically charged, inherently regional musical catharsis.

CBGB's was THE venue of an era; an embodiment of what it meant to be in a band, striving for everything you got. In many ways the birthplace of American Punk and the No Wave movement, one can say the music created there was -at its very essence -- a revolutionary influence, and its corrosive nature has infected millions of people through the years. One in particular, a soundman on the staff, was tainted by the experience, changing him into an iconic corner stone of metal; I am, of course, referring to Prong's very own Tommy Victor.

Dissonant, dark, detached -and at times rather deranged --Tommy Victor, founder and frontman of Prong, always swings his riffs low, hard and squarely at your skull. Victor never did 'happiness' and Prong didn't necessarily give a shit about making the 'feel good album of the year'. For Victor, high-praise is best served in the packed clubs and sweaty mosh-pits he plays in around the world. This is all the proof he needs of a dedicated fan base which never misses the band's shows, and loyally buys albums while 'critics' consistently miss the boat. Every time Prong was ignored by the mainstream -whilst revered through the underground --or ripped off by lesser, spineless musicians who don't have a creative pot of their own to piss in - Prong just got harder, stronger and more pissed off. It fuelled them even more, and drove them even further. This is not your parent's band; this is brutality with no regrets amplified, distorted, and turned up to 11.