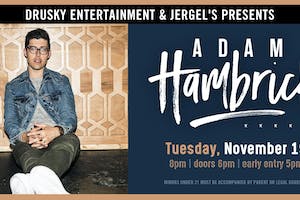 Capitol Records Nashville’s Adam Hambrick grew up in between Mississippi and Arkansas, influenced by artists such as Alan Jackson, Garth Brooks, John Mayer and The Foo Fighters. Growing up, Adam’s musical roots were grounded in the church singing hymns with his family, where his dad was a Baptist pastor and his mom played piano. After graduating from the University of Central Arkansas, the singer-songwriter made an appearance on Good Morning Arkansas where fellow Arkansas-native and country star Justin Moore happened to be watching and was impressed by Adam’s unique voice and distinctive songs. This was the first of many circumstances that changed the course of his life. Soon after, Justin’s producer Jeremy Stover reached out opening the door for Adam to move to Nashville and pursue music full-time. Since then, Adam has written a multitude of songs and had numerous cuts for other artists including Miranda Lambert and Eli Young Band, as well as, No. 1 hits for Dan + Shay (“How Not To”) and Justin Moore (“Somebody Else Will”). Since moving to Nashville, he has continued to hone his songwriting and vocal skills while developing his live show. Adam is currently working on his debut album with producers Andrew DeRoberts (James Blunt, Miley Cyrus) and Paul DiGiovanni (Blake Shelton, Jordan Davis). His first single, Rockin’ All Night Long, is resonating with country music fans everywhere as it recalls the nostalgic late-night memories made throughout life. Check out www.adamhambrick.com for tour dates, music, videos and more.